Here in New York, there is a hidden cobblestone path in the West Village called Charles Lane. Not many people know about it. I’m like the only one I know who knows about it…except for the people I have shown it to when we were walking in the area. Charles Lane is between Charles Street and Perry Street, but it is only one block long between Washington Street and the Hudson River. I felt like I discovered hidden treasure the day I came across it.

As part of my 20th New Yorkiversary this year, I am celebrating these secluded enclaves that radiate the most positive energy New York has to offer by sharing them with you on Periscope! You can find me there @SusaneColasanti. Every Tuesday evening this summer, I’ve been Periscoping New York City block tours. This week was Charles Lane. Now that Periscope is archiving its broadcasts, you can watch it here. And you can search for me on Periscope and watch my past block tours, too.

Only a few people live on Charles Lane. They are all badass. Like these guys. You can tell by their door. 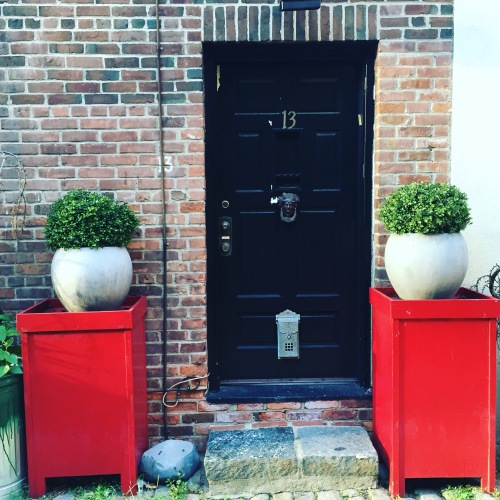 Here’s to more sweet discoveries, city love, and the power of looking up.