1. “This book broke my heart in a hundred and sixty-five different ways.” That’s what Brooke Reports said in her adorable review of Keep Holding On. Thanks for the love, Brooke!

2. Today is the last day to enter my Twitter giveaway to win an ARC of Keep Holding On. Reading this too late to enter? No worries! Breathing Books is also doing a giveaway. Just comment on my Hunger Games post to enter.

3. Tragically, I have no sightings of Justin Timberlake to report. But I did watch In Time. Is it just me, or do In Time and The Hunger Games have a lot in common? JT’s character lives in Time Zone 12. Katniss lives in District 12. Both of them are racing the clock to survive. And we want both of them to crush the corrupt systems that are making life so miserable for most citizens. Definitely recommended.

4. Have I mentioned that March 23 is burning a hole in my day planner? Cannot. Even. Wait. But March 23 is going to be insane, so I actually have plans to see The Hunger Games on March 25 instead. Not that it will be any less insane two days after the opening.

5. My friend Sharyn informed me of a very important happening here in New York. Sprinkles vending machines! Our Sprinkles is on the Upper East Side, a neighborhood I am rarely in. Which is actually a good thing. If I were close to Sprinkles, I would be compelled to stop by like every day. Have you tried their strawberry cupcakes? Have you done a shot of their strawberry frosting? Bliss, people. Bliss.

6. Speaking of treats, I was finally able to try the Cheesecake Factory while I was down in Texas. Dude, how do you pick one kind of cheesecake to try? I wanted to try them all! I forget what the one I had was called, but it was serious deliciosity. Caramel and an Oreo crust were involved. And the fried mac ‘n cheese? Yeah, I’ll be needing more of that.

7. How cute are these special edition Lorax Converse?

8. John Mayer has a new album coming out. Born and Raised drops on May 22. I’ve been anticipating this one since some postings of John playing songs he was working on for it were floating around a while back. I really admire the way he evolves as an artist with each album, but his sound at the core remains the same. Nostalgia, longing, and the little things that make us happy. That’s the purest little heart of him.

9. The Freedom Tower is getting so tall. I look at it every day and remember. 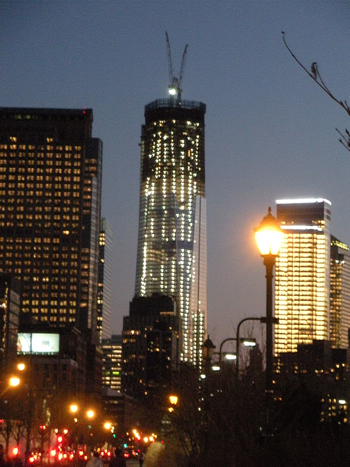 To me, One World Trade represents healing. And progress. And hope.

Wishing you healing, progress, and hope in this early springtime warmth. Enjoy 🙂