When I got to Eric Carle’s event yesterday, I tweeted that I would try not to burst out crying or otherwise make a fool of myself when I met him. Some people thought I was joking.

I was not joking.

I’ve been worshipping this man since I was four. My affection for The Very Hungry Caterpillar and The Grouchy Ladybug was intense. This was going to be my first time meeting Eric Carle. Some emotional stuff was about to go down.

The audience consisted of children ages two to eight, their parents, and me. Usually I get to big events like this two or three hours early, make friends, and talk to them the rest of the time, cranked up on adrenaline. This time was no different. Except it’s even harder to wait two hours when you are, say, five years old. So I talked to the girl in front of me and the girl next to me and watched them do their homework and tried not to spaz out that I was about to meet Eric freaking CARLE.

And then. There he was. Rocking a Very Hungry Caterpillar hat.

Eric Carle explained the inspiration for his new book, The Artist Who Painted a Blue Horse. Eric spent his boyhood in Germany during the time of the Nazi regime. Creating or displaying expressionistic art was forbidden. Fortunately, Eric had a wonderful art teacher who secretly showed him some of the forbidden art. Eric was inspired. Franz Marc was a German artist who loved painting animals in bright and unusual colors. He created many paintings of blue horses. Franz Marc was killed in World War I. The Artist Who Painted a Blue Horse is a homage to Franz Marc.

Penguin’s director of publicity was handling books for Eric. Shanta totally introduced me to Eric Carle! She even snuck the 40th anniversary floor display header I snagged one time over at Penguin for him to sign (he was only signing up to three books). When Shanta told him I was a fellow Penguin author, he drew a caterpillar in my copy of The Very Hungry Caterpillar. That’s when I lost it. I was really, really trying to keep it together. But when it was my turn and Eric looked up at me, all the things I wanted to say got stuck in my throat. All I could manage was, “I love your hat!” Anything else would have escalated the tears into full-on bawling. 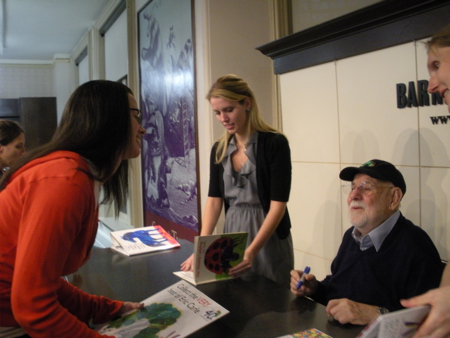 Here’s what I wanted to tell him.

Thank you for giving millions of people the gifts of creativity and imagination. Thank you for encouraging children to express what makes them unique. Thank you for inspiring me to think about creating books that would hopefully reach out to kids like yours have. And thank you for making the world a better place.

I believe Eric Carle to be the sweetest man in the world. Meeting him was one of the highlights of my life. I might have been too verklempt to tell him what was in my heart, but telling you is the next best thing. Thanks for reading.