Instead of jumping right into all of the Austin Teen Book Festival fun I encountered this weekend, I’m going to start with the second most important thing that happened in Austin. Because dude. I visited the actual Friday Night Lights football field that the actual Panthers played on where they actually filmed the show! 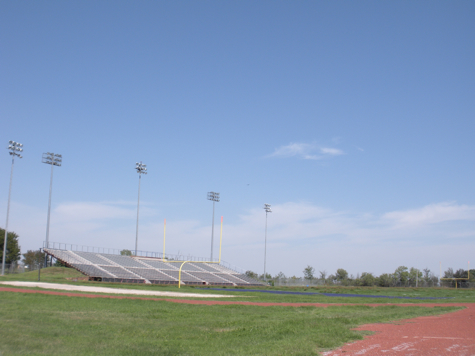 As soon as my plane landed in Austin, I started asking everyone about Friday Night Lights filming locations. No one knew where the real field was. Until my driver picked me up for my plane ride home. He knew everything. He had even driven lots of the actors from the show (yes, including Taylor Kitsch, or Tim Riggins as I will always and forever think of him).

The football field was on the way to the airport. As we approached this random, dusty little road, I could see the stadium lights above the trees. I could not believe I was seeing the real Friday night lights! The field was overgrown with weeds because they finished filming a while ago, but everything still looked completely familiar. The Panther colors were still there, which had been painted over the original school colors of the Cardinals. The school has been shut down for years. You could see the old colors on a side of the field house that was never filmed for the show, and then the Panther colors everywhere else. 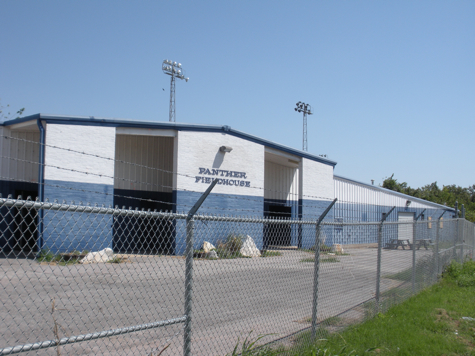 I walked up to the field with the theme song playing in my head and the chills I always get when I hear it. I’m not embarrassed to tell you that I almost burst into tears right there. I mean, this is where Tim Riggins and Matt Saracen and Coach and everyone dominated. This is where they were. But I did feel a little embarrassed in front of the driver, so I played it off like I had something in my eye.

It was really, really hard to leave.

Of course, the most important part of my trip was getting to connect with everyone at the Austin Teen Book Festival. Those readers are incredible! The place was charged with excitement the whole time. Ellen Hopkins gave an amazing keynote address. I loved that she read letters from readers. The ways in which a book inspires you or changes your life or helps you work through problems is the most powerful statement an author can make. It was so exciting to finally meet Ellen, along with author rock stars Ally Carter and Melissa de la Cruz. Here I am with Ally, Melissa, and Ellen at dinner after the festival:

Lots of people drove two or three hours each way just to be there. And they brought gifts. Shout-outs to Nani for making me a shiny gold star; BookPeople for the Keep Austin Weird sticker and for doing an overall amazing job; my teen escort, Julia, for making sure I didn’t get lost (Westlake HS is enormous!); and Girls in the Stacks for giving me the best peanut brittle in the whole entire world. Much love goes out to everyone who helped make the festival such a success!

I had a little time to explore Austin the night before. While I was walking to the deli Sandra Bullock owns, someone thought I was her! Which was very meta (and hilarious). The deli is called Walton’s Fancy and Staple and it’s the cutest thing ever. The guy working there told me Sandra’s there a lot. I think it’s cool that she’s so involved. There’s lots of flowers and pastries her sister makes and cozy areas like this one: 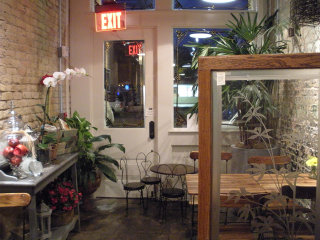 After Walton’s, I had to go to Whole Foods. It’s the second largest Whole Foods in the world (London has the largest). I cannot describe the enormity of that Whole Foods. It was intense. I got lost looking for water. They even had an entire cupcake counter! At the festival, I heard that you can go up on the roof and everything. Obviously, I must return to Austin. See you again, city that’s proud to be weird!