Back in 1998, I sent Nick Hornby a letter telling him how much I loved High Fidelity. Since Nick is awesome beyond belief, he sent me back a postcard. Of course I still have this postcard. His music obsessed characters and I have a few things in common. When one of my favorite authors sends me a postcard, I practically rent a billboard about it.

Here I am showing Nick the postcard after his Juliet, Naked reading on Tuesday: 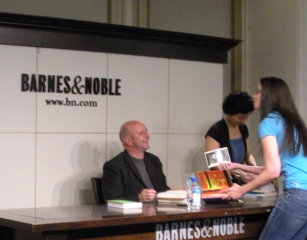 I was in full-on Freaking Out in the Presence of Rock Star mode, which is how I always get when I meet my authors. Symptoms include nervousness, increased pulse rate, and incessant babbling. So of course I went on to babble about how in 2001 Nick signed my copy of High Fidelity and I asked him if he believes in true love and he said yes, do I? And I said that I do and how does he define true love? Nick wasn’t sure. Then I was like, “Your characters never seem to find true love.” He said, “No, but they will.”

Now, a conversation like this was a lot easier to have eight years ago. Back then, it was just me and a few other people at Nick’s reading, all gathered in an intimate little group chatting about life. This time, his reading was at the ginormous Union Square Barnes & Noble with tons of people standing in the back. I got there two hours early for my usual second-row center seat and was shocked that it was still available. It’s official. Nick Hornby is a rock star.

After Nick signed my books (while he was chewing a piece of fluorescent yellow gum, which I thought was very cool), I gave him a copy of Waiting for You. He was appreciative:

Oh, I almost forgot. When I asked Nick how he defines true love at this point, he said that he still wasn’t sure. Then he asked me the same thing. SP was there as my personal photographer, even though he had just been struck down with a bad cold. I thought that summed up the concept pretty well.